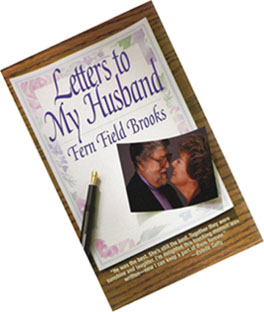 This highly personal narrative of bereavement described the journey of an award-winning film producer from wife to widow. Conceiving the idea of writing to her deceased husband as a therapeutic approach to accepting her loss, Brooks in the course of the ensuing year wrote intimate letters filled with professional ups and downs, family events and her unanswered longing for the way things were. From her hotel room in Paris, she writes to the husband whose sudden death at 64 has left her unmoored. The letters are liberally sprinkled with media names - an appendix provides further identification - as well as with comments on the philanthropic activities who enjoyed a close, 11-year marriage. The chatty, spirited letters construct a memoir that is one middle-aged woman's medium for moving on from mourning.

"An odyssey through the first year of mourning, offering comfort and inspiration… In these letters written over the course of a year, she relives the trauma of her husband's fatal heart attack, as well as many tender moments of their marriage."

The "real stuff" of widowhood by a fellow traveler.

One evening, while in her Paris hotel room, Fern Field Brooks, an accomplished Hollywood writer and producer, sat down and wrote a letter. This wasn't just any ordinary letter, it was addressed to her husband Norman. But Norman had been dead for almost a year. At the age of 64, after 23 years of friendship and 11 years of marriage, he had unexpectedly suffered a fatal heart attack, leaving Fern alone.

From the time of his death until its first anniversary, Fern tries to recover from the loss by alternately burying herself in work, raging against the pain and denying her emotions. The healing process didn't truly begin until that night in Paris, with her first letter that starts off the series entitled Letters To My Husband.

More than just the letters, the book features vivid remembrances, poems, news clippings and advice from friends. It offers inspiration and support for anyone who has ever experienced the grief of losing a spouse, friend, relative or loved one.

Four Trees - Cut down everything in sight. This is a great one.
Three Trees - Those that died did so for a good cause.
Two Trees - A couple of trees died in a decent cause.
One Tree - Worth some scraps that fall from the saw bench.
No Trees - a complete waste of timber.

"Letters To My Husband" - Four Trees…This is a great one.

If Fern Field Brooks' name seems familiar, it's because she was one of the producers of the show "Golden Girls" and was instrumental in the development of the show "Maude." *

Nominated for Emmys and Oscars, Fern Field Brooks was married to producer Norman Brooks. Their relationship was one of which dreams are made. They were deeply in love with each other.

He died five years ago and she had a terrible time coping with the loss. To salvage her sanity, she began writing to her dead husband, sharing her little moments of triumphs and sorrow.

Appearing at the American Book Sellers Association Convention in Chicago in June, she said, in an exclusive interview with the Star Banner, that at first, the letters were just therapy. Now they have become more. "It's like I'm still talking to my best friend," she said. "I feel that he's still with me, watching over me."

Accompanied by her best friend, Estelle Getty, Brooks talked openly of her continuing love for her husband. "He was my friend and my husband and my co-worker and I miss him terribly," she said. At first, I didn't think I could even cope with losing him and writing the letters to him kept him near. He's not here, but he's not gone."

Getty, often reaching to pat Brooks' arm or give a quick smile, appeared at the show with no fanfare and no wish for publicity. She said that the book was the one way Brooks could cope with what had happened in her life.

Brooks is not a sad person. Her eyes sparkle with delight as she talks about her husband and the warmth in her voice is clearly sparked by the love she still feels for him.

The letters, now reproduced in this book, are a chronicle not only of her life since his death but of the strong love she still feels for the man she described as "the love of my life."

The text is just lovely as she writes recreating moments they shared and telling him of new experiences she endured without him. It's an emotional and beautiful story of undying love and faithful devotion. It's a strong lesson on mourning and surviving.

*Correction: Actually, the author was not involved in the GOLDEN GIRLS television show - she's just a friend of all the stars in the series (Bea Arthur, Rue McClanahan, Betty White and Estelle Getty) and her first job in the television industry was as assistant to Rod Parker, Executive Producer of MAUDE, which was created and developed by Norman Lear.